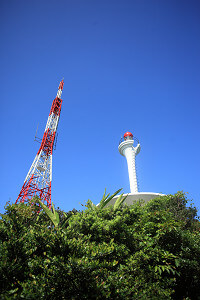 Yehliu Light Beacon
The light beacon is designed in a fashion following the candle shaped rock as prototype. Built in 1967, the light beacon is measuring 11.3 m in height and is located on the top of Gueitou Mountain. One may head to the spot along the side road apart from the main trail that starts from the top of the cape. The Yehliu Light beacon is within the range of projection radius as formed by Fuguei Cape Lighthouse and Keelung Lighthouse and thus reinforcing the operation of Keelung harbor.

Yehliu Radio Tower
The radio tower located beside the Yehliu Light beacon is used for fishery communication. The 20 m tall tower is easily distinguished with its white-red interleaves design, and is often mistaken with the light beacon. 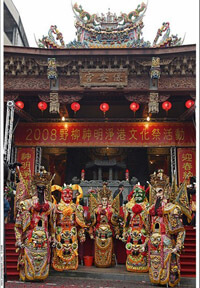 Baoan Temple
Baoan Temple is the religious center of Yehliu; the “Sacred Prince-Developer of Zhangzhou”, Mazu, Tu-Di-Gong (local earth god) and other gods and goddesses are being worshipped here by local people. Long time ago in the Ching Dynasty (1820 B.C.), a boat was floating to the waters near Yehliu area. Local people found it, carried no one, but a piece of god sculpture with a bunch of materials used for building houses. Later on, they used the materials they found on the boat to build the Baoan temple and settled the god sculpture there. It’s confirmed later that the piece of god sculpture as found is the statue of General Chen Yuanguang, the Sacred Prince-Developer of Zhangzhou.

Harbor Cleansing
Harbor Cleansing is one of the three major religious rituals held and performed by Baoan Temple on the 15th day of the first month in lunar calendar. The ceremony begins at 10 o’clock in the morning with several strong men jumping into sea while carrying a sedan chair; later on, those sedan chair carriers will get up on the opposite side of the harbor. Next, a “Passing Fire” ritual will begin at 11 am, while a religious parade will be performed in the afternoon to pray for bless to local people.

Speed Testing Stand
A compass shape platform is situated on the top of the stairs in the second area. It was a speed testing stand for ship set up by CSBC (China Shipbuilding Corporation). The speed testing stand is composed of two platforms positioning in a distance of 1.8 km in between. The velocity of the ship can be calculated by measuring the times that the ship passes the two staff gauges as located on each platform. Since this calculation approach is much higher in cost, people now use GPS to conduct the measuring. 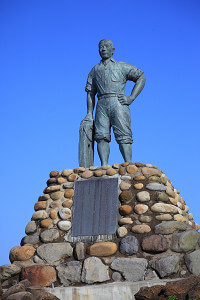 The Statue of Lin Tianzhen
Before an official scenic area was established, Yehliu was open spot without safety resources. March 18th, 1964, a group of students were visiting the area while a student named Chang Guoquan fell into sea by an accident. A local fisherman, Lin Tianzhen, jumped into the sea to save the student; unfortunately, both of them were drown in the end.

Upon hearing the news, President Chiang Kai-Shek gave orders to set up a statue in memory of the fisherman, Lin Tianzhen, while his story was also included in the textbooks for people to remember his brave acts.